One of the things that worries me about taking this trip and going to remote places is the lack of medical facilities should any of us fall sick or get injured.  Most of our travels are going to be close to towns, chemists and hospitals, but there are a few stints where we will be away from civilisation for up to a week at a time. So I must be prepared for any variable that can arise.

Today I have gone through all of our first aid kit and re organised our supplies. We just have a basic St Johns box that we have used for years. 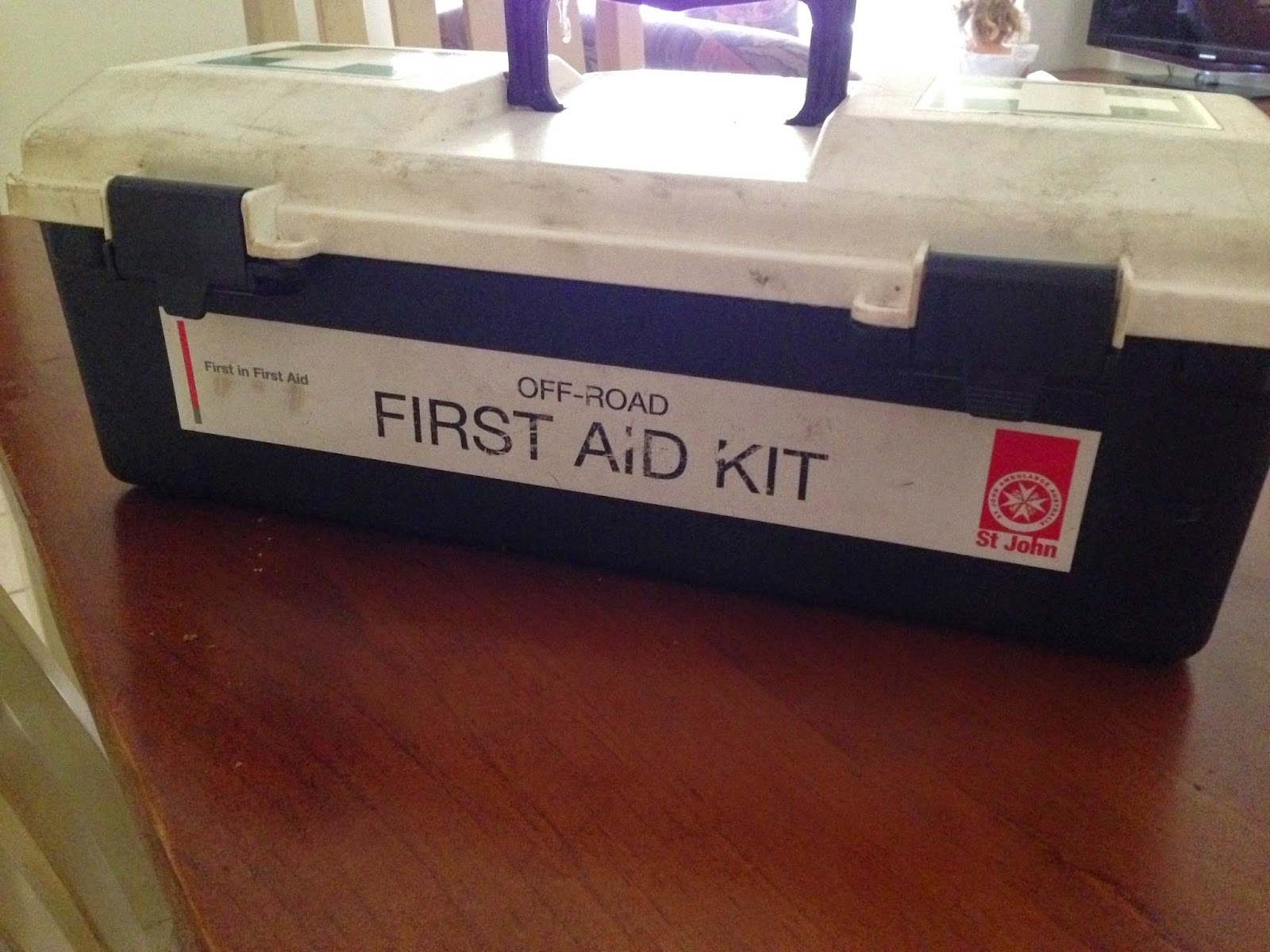 I took everything out and checked use by dates. I then organised into zip lock bags for better organisation within the box. 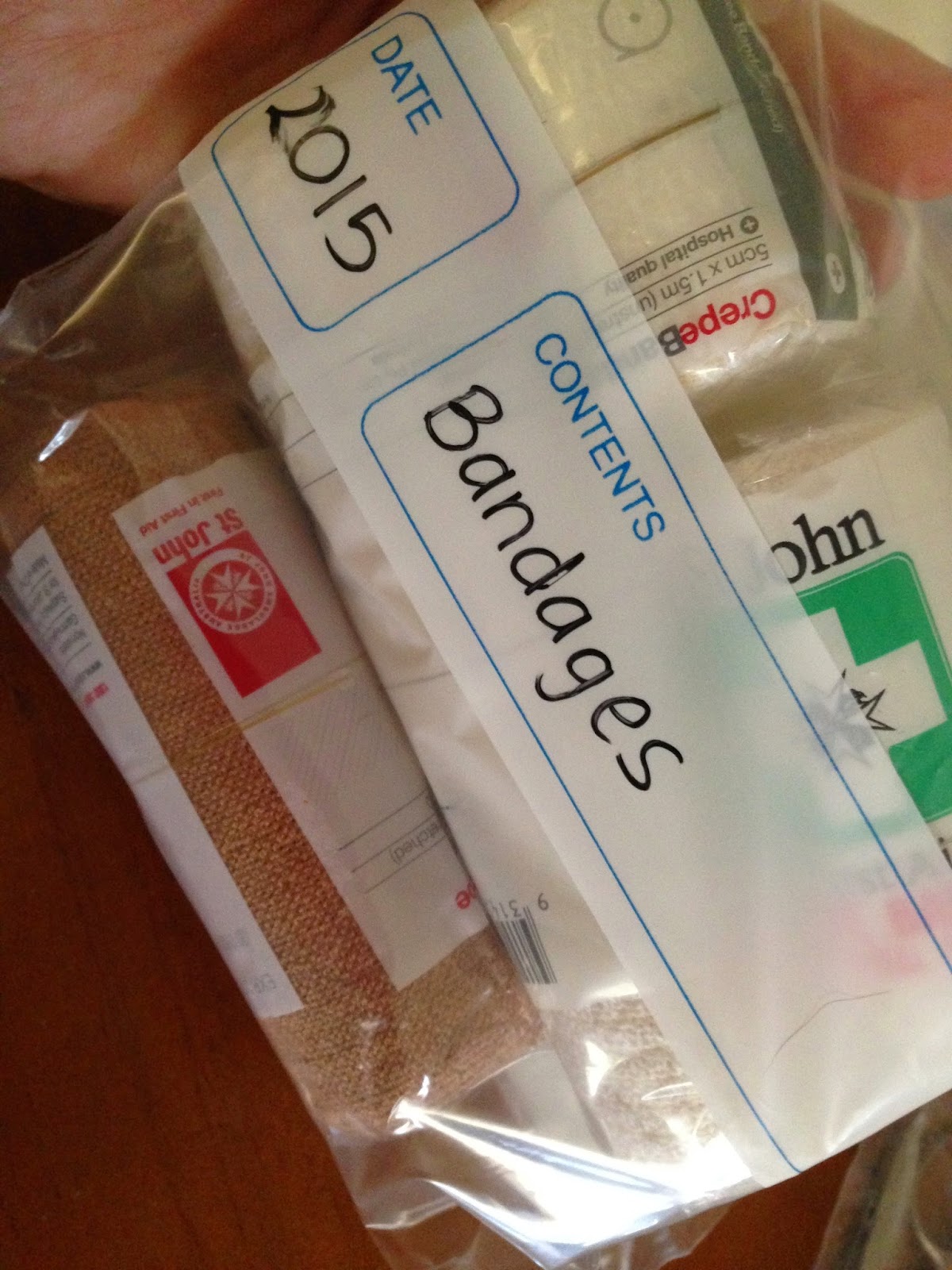 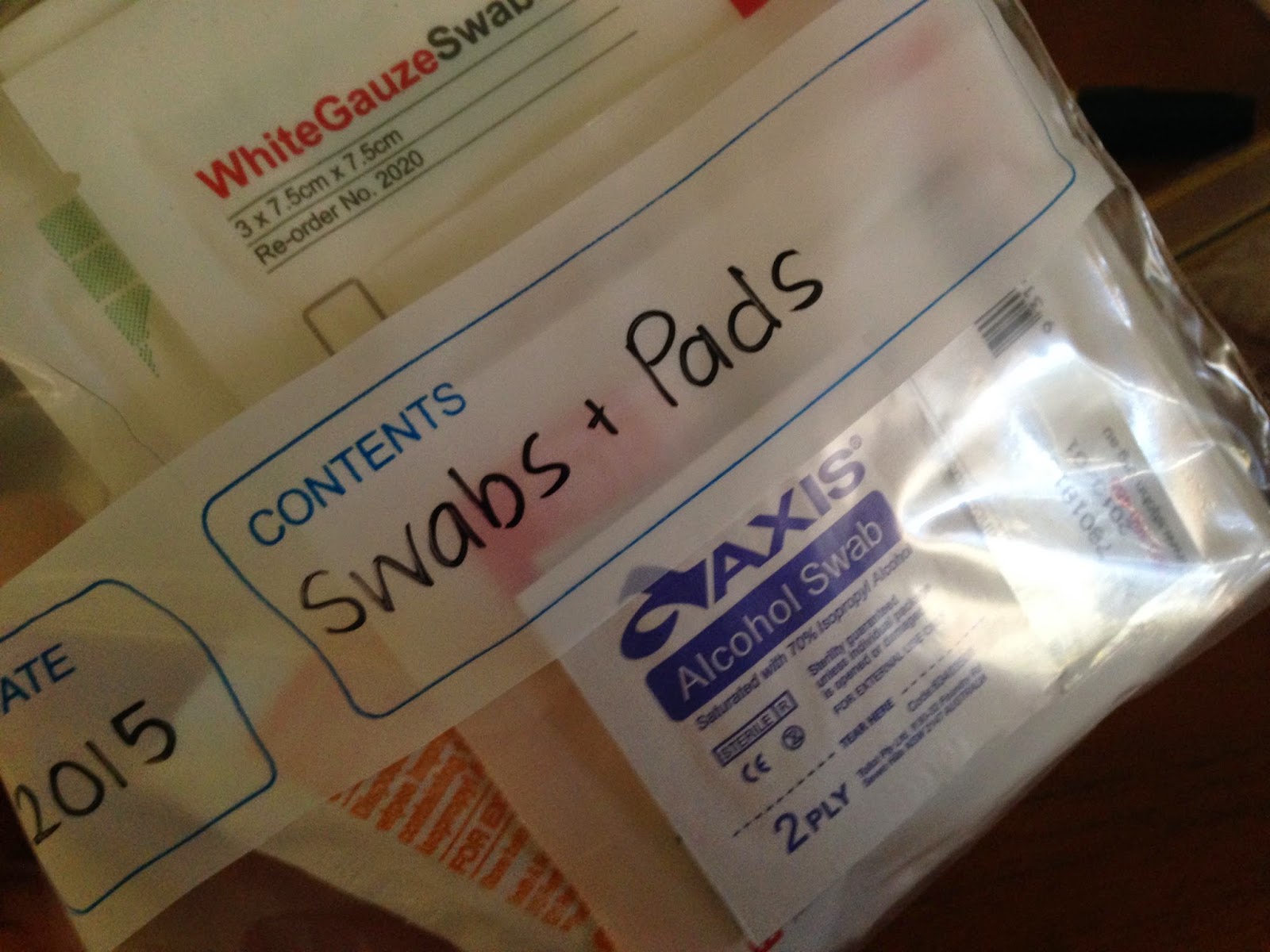 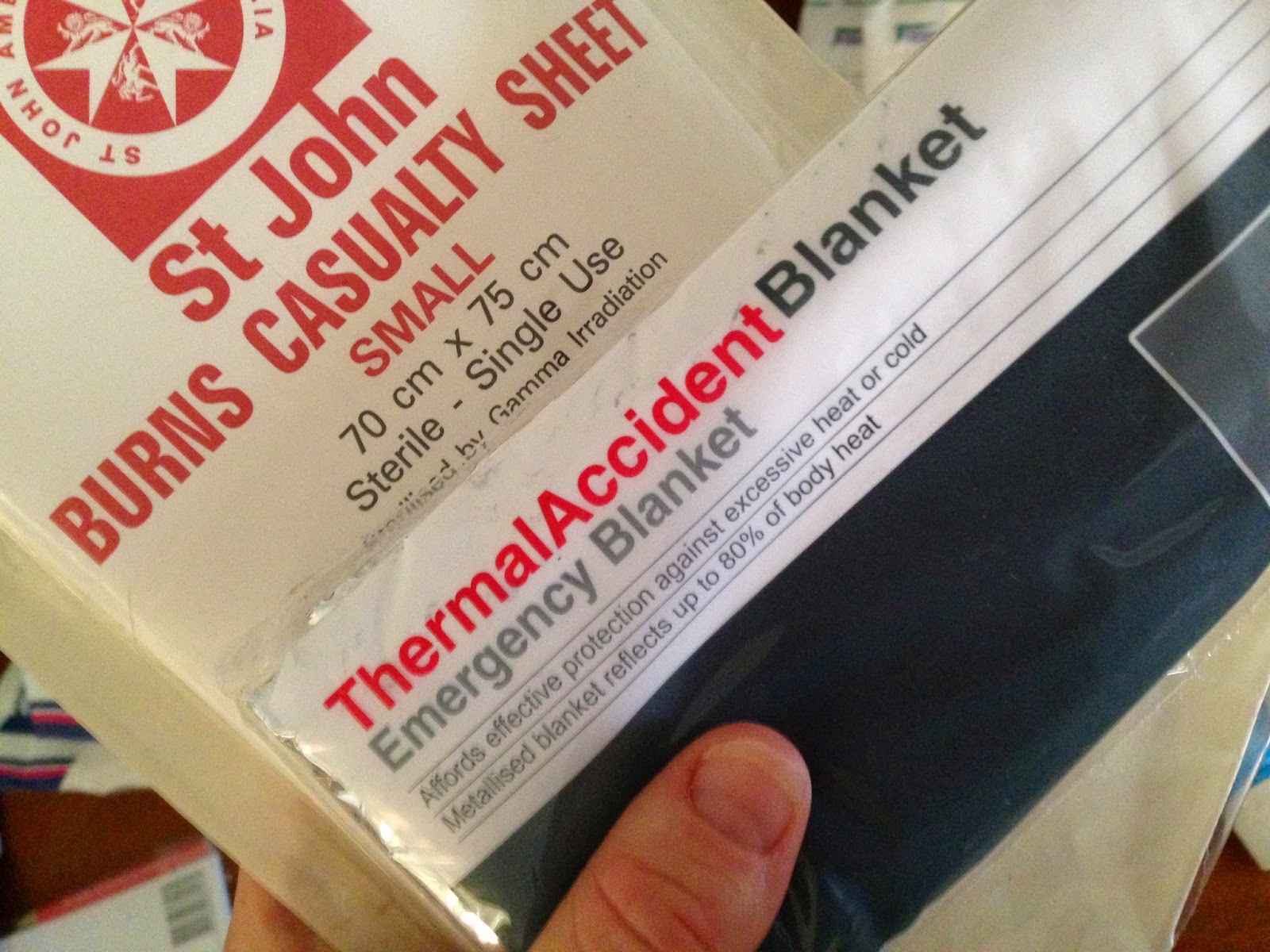 I then organised the more regularly used items in the top shelf of the box. Things like kids panadol. adults panadol, Dora bandaids..!! 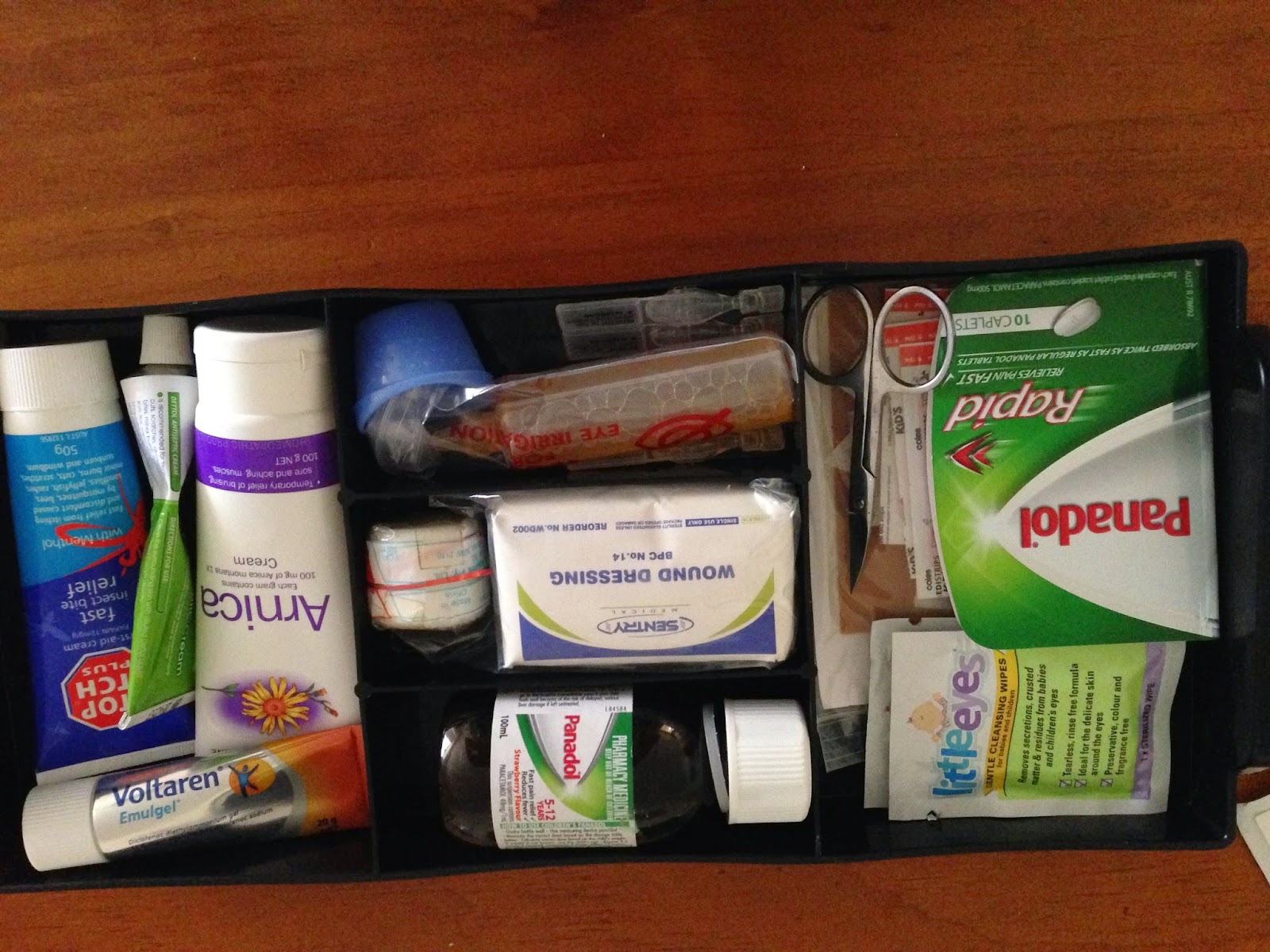 I also made a small 'lunch box' size first aid kit for the camper. If incase one of us is out in the car and the other is at the camper and needs something. Or if its the middle of the night and we don't want to go out to the car. This box has the basics; panadol, cold and flu tablets, kids chest rub, cold sore cream, bandaids and a small bandage. And a brand new nasal spray for Craig who gets hay fever which can make his life miserable. 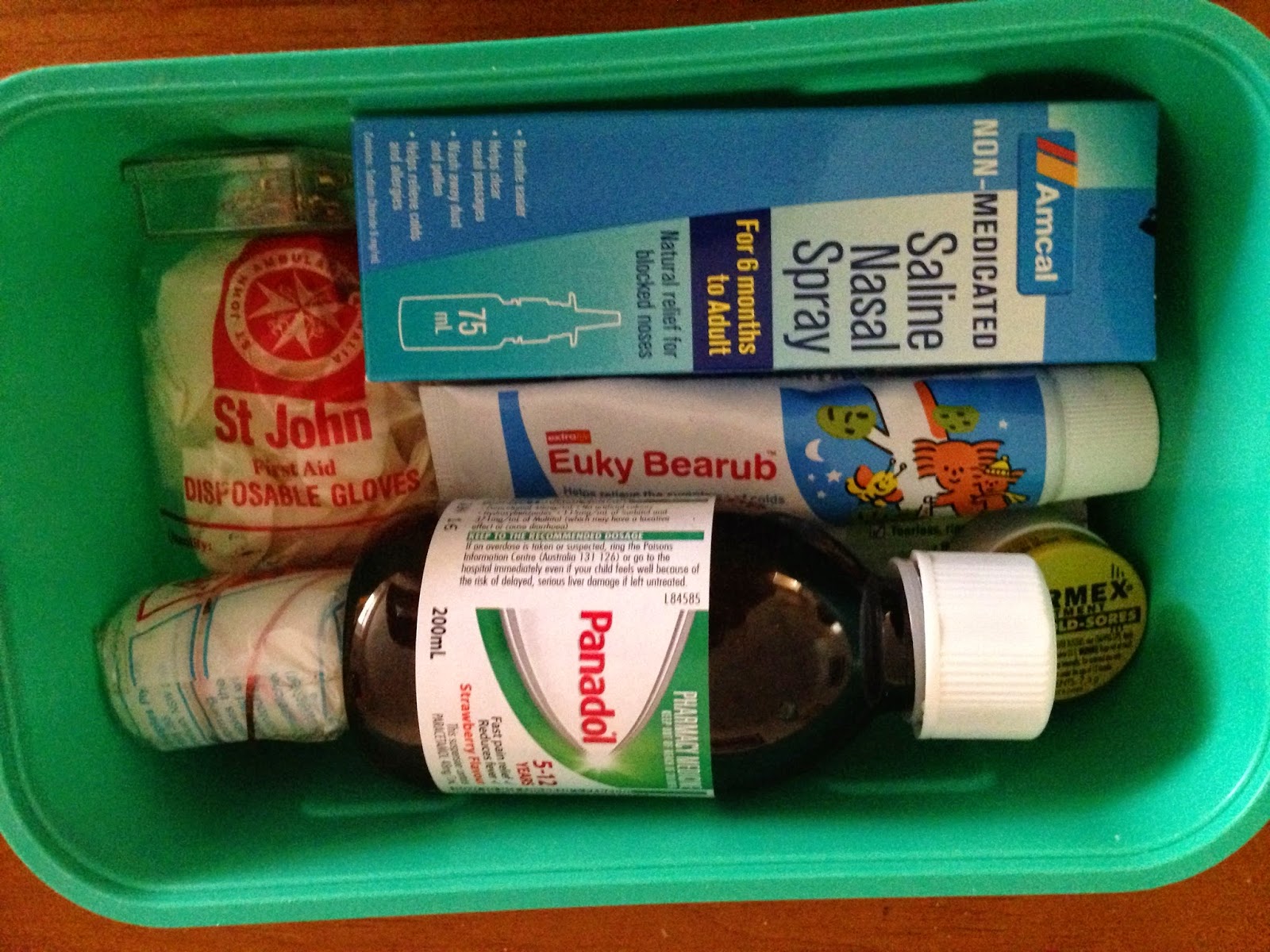 Usually the first aid kit (or as the kids call it, the Doctors Box) only comes out for mild injuries or discomforts. Sometimes we just need a Dora bandaid or an eye wipe so we can carry on with the day!

But sometimes things can get serious.

Several years ago Craig was four wheel driving and came across a man who had been injured in the sand dunes on his motorbike. Craigs basic knowledge of first aid and his kit which contained thermal blanket, bandages etc assisted the man until they could get him out of the four wheel drive area and to the waiting ambulance. It is something that has stuck in my mind and in Craig's and as a result we have always had a first aid kit in the car.

Because its not just us as a family that I need to be organised for, but fellow campers and strangers we may cross along the way. Also thinking about the four people that saved the man who was attacked by a shark on a remote beach in Esperance late last year. It was noted on 60 minutes the other night that had they not have had basic first aid supplies to tourniquet his wounds he would have definitely died.

It is very very unlikely we will be in that position but if we are, at least I am able to assist in a small way until medical help arrives.