The truth is we very nearly didn't come home. Two weeks before our return, sitting in the caravan park in Port Augusta, Craig got a call from his workplace to say they had replaced him in his management role. And he would be back on the tools again, which paid less money, but it was a job nonetheless. It was the exact same day we had just chosen a rental property online and paid several thousand dollars in bond and future rent. Had the phone call came a day earlier we would never have organised a rental back in Perth and we would have kept travelling. Probably stopping along the way to get some work. Anyways, it all happened the way it happened... obviously for a reason.


We returned to Perth September 2015 and moved into a rental property in Perth Hills, close to my family and the kids school. Craig went back to work and was soon back in the same daily grind, he put in some long hours, often going to mine sites for up to two weeks at a time with little break in between. I took a few days of relief teaching here and there and was busy with the kids. We sort of made a plan to buy another house to live in and 'settle down'. But for the first time in our lives the plans we made were grey and sketchy and both of us didn't quite know if we were ready to settle. We were lucky. We made a decent amount of money between us. We were debt free which was lovely and soon saved up to hook the camper on again several times. One of those trips was back to our favourite spot on the map, Broome.


Setting up the camper in Broome felt a lot like going home.  That atmosphere of caravan parks, the chatting of old people, the laughing and playing sounds of the young kids on their bikes, the smell of sausages cooking for dinners, the fresh air, walking to the showers and spending an hour on the way talking to people, something which I had missed so much. We had a lovely rental in Perth, a nice big house that we quickly filled with our stuff. But it was lonely compared to the 6x6 camper and the open air of a camp ground.


One afternoon while in Broome Craig looked at me and said 'gee I would love to live up here in the Kimberley'. It had been a long cold winter in Perth. He was particularly stressed, having gone from the relaxed togetherness we had as a family on our trip to going back to the long hours, days and sometimes weeks he was away from us working bloody hard but getting nowhere fast. Once you know how the other way of living feels its hard to go back to the stress of work, other peoples shit, materialism, and greed. We did a good job to stay level and grounded but it was slowly seeping back into our lives and by this point, 9 months after returning from our big lap, we were ready to get away again.


It a fleeting moment, and without putting much thought into it, I jumped on my phone and glanced over teaching oppertunities in the Kimberley, WA. I flicked my resume off for a job as I sat at our campsite in Broome. I really never thought I would get a look in, but the next afternoon I got a call from the Principal who offered me a job on the spot.


So here we were at yet another fork in our lives. We sat by the pool at the Cable Beach caravan park and while the kids played we had the conversation. Do we stay in Perth, buy a house in the hills the following year. pay mortgage, pay rates, pay bills, work hard, pay more bills, go on a three week holiday once a year. It wasn't a bad life, It was actually a good one. We had good friends, lived close to family, the kids were in a good school. Craig made a lot of money, I made play money with my teaching relief work. It would be easy to stay in that rut. It wasn't a bad rut to be in. But it was a rut. Or do we grab life by the balls and have yet another adventure. Take this teaching job and live in a place entirely different from anything we had every experienced before. Taking this job meant we halved our annual combined income. Taking this job meant I took the kids out of their school again. Taking this job meant we were away from family and friends. But taking this job? well it kept life interesting. It meant we were within arms reach of our favourite parts of Australia. Camping and fishing possibilities endless, we would meet new people, see new things. And for me career wise, well taking this job would define me as a teacher.

My biggest consideration in all this was my girls. Their little faces were laughing as they played in the pool at the caravan park. I sat and looked at them and wondered what benefits there would be for staying or going. I decided to ask them outright. I put it all out there to the kids before we made a decision. How would they feel moving all the way to the top of Australia and going to a different school for a bit.  And you know what they said? 'we don't mind Mum'.

So I signed on the dotted line. And five weeks from when I sent my resume we were packed, and had moved over 3,000km to our new destination in the Kimberley. Derby. 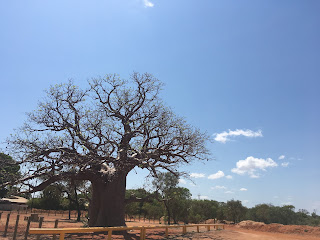